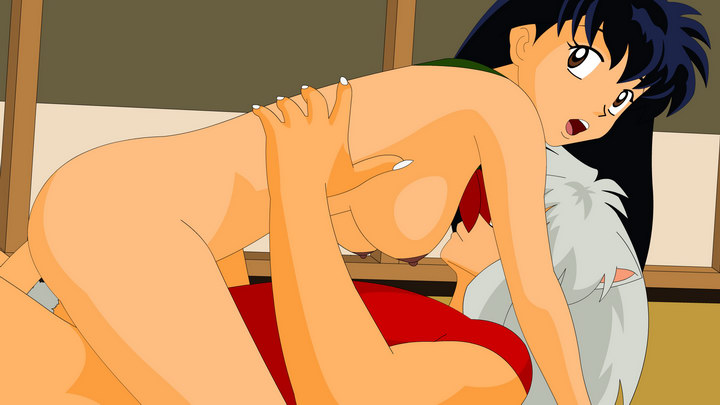 Koga snatched the rest of Inuyasha's clothes off. He licked at his neck eagerly. Inuyasha moaned as he grabbed hold of Koga's shoulders for support. Koga trailed hot kisses down Inuyasha's chest, to his belly button. Koga plunged in his tongue. "Ahhhhhh!" Inuyasha cried. He thrusted his tongue in and out. 'Oh Kami! This is so good!'. Koga laughed at his partner after catching his breath, looking toward the hanyo and explaining as he tucked his now flaccid cock into his loin cloth, "It seems like I showed you a lot more than you did me." Inuyasha's face became annoyed but, unable to argue, he said nothing.

Inuyasha is always uneasy and jealous during Koga's visits because he worries that Kagome might have feelings for Koga. In this way, Koga has often been the source of Kagome's and Inuyasha's fights. Koga and Inuyasha don't get along, but the two do team up whenever Kagome's life is in danger whenever they go up against Naraku or one of his demons. Without even thinking, he plowed his cock into Inuyasha. Inuyasha screamed in a mix of pain and pleasure; embracing them both. Koga froze, "Shit! Are you ok Yasha?" Inuyasha growled, "Move dammit!" Koga, for the third time was shocked.

Inuyasha's Mother Story (Koga x OC) Chapter 1: Inuyasha's new mother! Misty the Pokemon Master, Sparrow Girl. Ai's POV placing his much smaller hand into mine and I held his hand before we begin walking through the dark woods and making it to the edge as the sun rose, allowing me to see Inuyasha transform into his half-demon form and I. I set Koga down gently and jump into the river to rinse the wolf stench off of me while everyone else gets to the cave. I shake off after getting out of the water and bump into Inuyasha, who is chasing after a Saimyosho, which must have found the cave. I run into the cave when I smell oil and gunpowder.